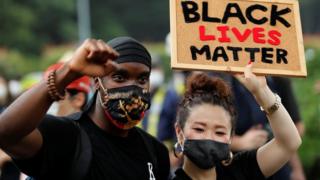 Image copyright Reuters Image caption Japan traditionally sees itself as a very homogenous society To many Japanese, racism towards black people has long been considered something that happens in the US or Europe, not at home.But when the death of George Floyd in the US sparked a wave of protests demanding that Black Lives Matter,…

To many Japanese, racism towards black people has long been considered something that happens in the US or Europe, not at home.

But when the death of George Floyd in the US sparked a wave of protests demanding that Black Lives Matter, people in Japan joined in too.

The protests and marches in major cities pushed a debate about racism in the country, and whether enough was being done to confront and change things.

In June, public broadcaster NHK aired a segment to explain to Japanese audiences what was happening in the US, with the protests over George Floyd’s death.

The report, in a news show aimed at younger audiences, featured an animated video depicting the protesters as grotesque stereotypes, deeply steeped in racist imagery: caricatures with exaggerated muscles and angry faces, and with looters in the background.

The reaction was largely negative – the US embassy called the segment “offensive and insensitive”.

He tweeted that it was “offensive racist commentary” and it was time for Japan to stop the “lame excuses” on handling of black issues.

NHK later apologised, and following the widespread attention Mr McNeil’s articles received, invited him in to discuss the problem.

He soon found himself giving a talk to the entire NHK staff, which he said was an “extremely interesting” experience.

“There were a lot of great questions that showed that a lot of people did not know there were problems with blackface or white washing. It was really important that someone came in and was able to explain it.”

Mr McNeil has both praise and criticism for the country he has lived in for 16 years. He says that in his immediate surrounding of friends and students, people have been very welcoming and open – and often curious and receptive to learn about his outside view on the Japanese experience.

At the same time, he points to a level of everyday casual racism he experiences.

“I’m safer here than in the US, no question,” he says. “I haven’t experienced police brutality like you would in the US, but yet there are paper cuts of racism every day and those also add up. Being other-ised on a daily basis means you still live through some tough stuff.”

It’s an experience he says, that’s not unlike that of the many so-called “hafu”, people who are biracial – with one parent from Japan and one from another ethnic group. And it proves wrong the idea that there simply is one general kind of xenophobia, equally directed at all non-Japanese groups in the country.

“Non-Japanese have a different experience according to what they are mixed with,” Mr McNeil explains. “The ones mixed with whites are the ones who get the modelling contracts and are put on a pedestal – but it’s a very different story if you’re half Korean or half black.”

For example, when a half black Japanese woman was crowned Miss Japan in 2015, she was berated in online comments as unfit to represent the country.

Tennis champion Naomi Osaka has a Japanese mother and a Haitian father. In an advertising campaign, her skin was made lighter and comedians were joking she maybe should get some bleach to change her skin colour.

Osaka has herself been very vocal against racism both in Japan and in the US. This week, she withdrew from a top US tournament in protest against police violence against black people in the US, after which the entire match day was postponed.

“All of these are examples that show that perhaps the Japanese public is not quite ready to embrace their biracial population,” Mr McNeil says.

Official statistics in fact count biracial citizens simply as Japanese, he points out, reinforcing how people see their country as largely homogenous, unaware that many of their neighbours don’t fit in that easily.

John Russell, anthropology professor at Gifu University, told the BBC that anti-black racism is evident in “a whole wealth of images that permeate Japanese society”.

Japan for most of its history had been largely closed to foreigners but when in the 19th Century, the United States forced Japan to open to international trade, the US military mission treated their Japanese hosts to a minstrel show: a set of skits and musical performances by white crew members in blackface.

Jump to the 1930s and Tokyo’s nightlife featured vaudeville shows of Japanese actors in blackface. In fact, one of the country’s most famous comedians, Enomoto Kenichi, or Enoken, used blackface in several instances in the 1920s and 30s.

“It’s in fact a tradition going back almost as far as in the United States,” Mr Russell says. Although on a smaller scale than in the US and without the American social memory, the stereotypical depiction of black people has been there all along, he explains.

Social media has helped to challenge some of the views in conventional media, he says, but that is “a mixed bag”.

“It has both elevated the discourse on racism but also elevates racism itself, creating a platform where vitriol can come to the surface.” The abuse the likes of which Naomi Osaka receive online is a case in point.

“I’m hoping that the situation is changing” he says. “But I tamper whatever optimism I have with an amount of caution.”

‘Change is still a long way off’

“Discussing racism is taboo. But it’s the 21st Century and we do need to talk about these things,” says Mutsuko Betchaku, who attended on of McNeil’s classes.

While she feels many people around her share the same level of awareness, “there are others who don’t want to even think about it, or those who aren’t aware at all – people who feel it has nothing to do with them.”

She says she herself had been aware of racism against black people before the events of the recent months, but that racism is usually only discussed in relation to xenophobia against Chinese and Koreans.

Fellow student Hitomi Hideshima agrees: “I also knew for a long time that there is discrimination especially against Chinese and Koreans in Japan.”

Both say that the information that average Japanese get on the issue from the media is very superficial, lacking in depth, background and history.

“The Japanese media presented Black Lives Matter as just an American problem,” Ms Hideshima says. And while recent events might have brought about a beginning of change, the optimism is somewhat muted.

“There might a slight change in consciousness now, but visible change is still a long way off.”