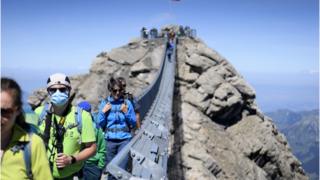 Image copyright EPA/LAURENT GILLIERON Image caption Tourists wear face coverings as they walk the Peak Walk suspension bridge of Glacier 3000, in Les Diablerets, Switzerland Travellers in Switzerland, Jamaica and Czech Republic who return to the UK from 0400 on Saturday must self-isolate for two weeks, the UK government says.It said the move was needed…

Travellers in Switzerland, Jamaica and Czech Republic who return to the UK from 0400 on Saturday must self-isolate for two weeks, the UK government says.

It said the move was needed to keep UK infection rates down.

People arriving in Scotland from Switzerland are already required to self-isolate.

Cuba, where there has been a drop in cases, will be added to the list of destinations people can return from without entering quarantine.

The UK considers imposing quarantine conditions when a country’s rate of infection exceeds 20 cases per 100,000 people over seven days.

The government said data showed there has been a “consistent increase” in the weekly case rate in Switzerland over the past four weeks, with cases per 100,000 rising from 18.5 to 22 over the past week.

Over 1.6m Britons travelled to Switzerland last year, the Swiss Tourism Federation estimated. More than 300,000 British tourists visit the Czech Republic every year, according to the Foreign and Commonwealth Office.

The Foreign and Commonwealth Office has also updated its travel advice to advise against all but essential travel to the Czech Republic, Jamaica and Switzerland.

Announcing the new rules on Twitter, Transport Secretary Grant Shapps urged British holidaymakers to “only travel if you are content to unexpectedly 14-day quarantine on return”.

The Department for Transport (DfT) said that as infections rise across Europe, the government had made it clear it would take “decisive action” to stem the spread of the virus.

This would include “rapidly” removing countries from the travel corridors list if the public health risk became “too high”.

It advised UK tourists in Switzerland, Jamaica and the Czech Republic to “follow the local rules and check the FCO (Foreign and Commonwealth Office) travel advice pages”.

There had been concern about a rising number of Covid cases in Gibraltar, but it remains on the UK’s quarantine exemption list.

Quarantine rules are set by each UK nation separately, but the DfT said equivalent measures are being put in place in Northern Ireland, Scotland and Wales.

Last week restrictions were lifted on those returning from Portugal, but added for travellers coming back from Croatia, Austria and Trinidad and Tobago.

DfT introduced the compulsory 14-day quarantine for arrivals from overseas in early June.

In the following month, the four UK nations unveiled lists of “travel corridors”, detailing countries that were exempt from the rule.

Since then, the governments have regularly updated that list, adding and removing countries based on their coronavirus infection rates and how they compare with the UK.

Travellers returning to the UK from Spain in July were caught out by the government’s decision to advise against all but non-essential travel to the mainland and islands after a spike in cases in the country.

Shortly after, visitors to France were given a few days’ notice that they would face a 14-day quarantine upon their return home to the UK.

Have you been affected by the quarantine announcement? Share your experiences by emailing haveyoursay@bbc.co.uk.