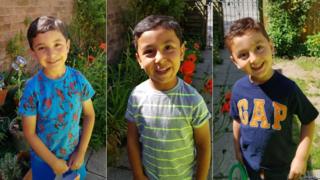 An urgent manhunt is under way for a father who abducted his three sons from their foster home, police have said.

Imran Safi, 26, is said to have threatened a foster carer with a knife in Coulsdon, south London, last Thursday.

He is accused of taking Bilal, Mohammed Ebrar and Mohammed Yaseen – aged six, five and three.

An image of Mr Safi has been circulated to all ports and borders amid concerns he may attempt to take the boys abroad.

All three brothers were playing in the garden while their foster carer was inside the house on Coulsdon Road when they were taken, detectives said.

The foster carer, who told officers that Safi threatened her with a knife, did not suffer any serious physical injuries but was “understandably distressed”.

It is understood that the boys were due to be formally adopted, a fact detectives believe could have been a motivation for the abduction.

Mr Safi was not thought to have access to the boys’ passports.

Metropolitan Police Commander Jon Savell said the boys had “been in social care services for some while” and their natural family had become aware they were going to be adopted.

He added that Mr Safi was not allowed to go to the foster carer’s address and had “taken the law into his own hands” by doing so.

Mr Savell said it was “an absolute priority” to find the three children and more than 100 officers were working to locate them.

“They have been taken from a place of safety and we are growing increasingly concerned about their wellbeing, particularly as we remain in the midst of a global health crisis,” he said.

“While we do not believe at this time there is any immediate risk to their physical safety, their location, access to accommodation, healthcare, and other provisions is entirely unknown.”

“We are concerned about the longer-term impact of this on all three children.

“An intense investigation into how this abduction was planned and carried out is being led by detectives in south London, alongside a manhunt being led by specialist detectives within the Met.”

Eight people aged between 17 and 37 have been arrested in connection with the abduction.

They were all arrested in Croydon and have been bailed to a later date, the Met said.

A red Nissan Qashqai, with the registration PK13 WFO, is thought to have been involved in the abduction.

Police are struggling with this case.

The getaway car was found in the area. It is possible the father may have switched vehicles. The first thing they did was to inform airports and sea ports.

Now they are worried an attempt will be made to smuggle the children abroad – a traumatic experience for such young boys.

It may already have happened.

Mr Safi is an Afghan national and has links to Pakistan but police do not yet know if he has travelled overseas.

Detectives are working closely with national and international agencies to ensure any movement into foreign countries is identified.

Ch Supt Dave Stringer said that the incident would “understandably send a shock” to the local Croydon community.

“We know there are people with detailed knowledge of the whereabouts of these children, and we fully appreciate there may be very good reasons for those individuals not wanting to come forward,” he said.

“But right now I would strongly urge them to do the right thing and assist us in locating them.”

Croydon Council declined to comment due to the “active police investigation”.