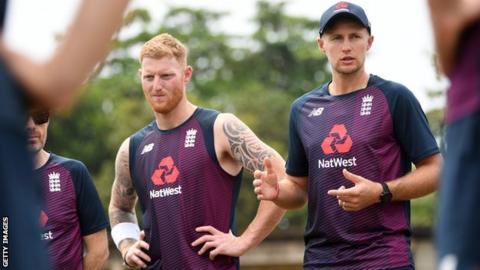 Ben Stokes (left) was reinstated as vice-captain to Root (right) last yearBen Stokes will captain England for the first time next week after it was confirmed Joe Root will miss the first Test against West Indies to attend the birth of his second child.Root, 29, will leave England’s training camp in Southampton on Wednesday, with…

Ben Stokes will captain England for the first time next week after it was confirmed Joe Root will miss the first Test against West Indies to attend the birth of his second child.

Root, 29, will leave England’s training camp in Southampton on Wednesday, with the birth expected later this week.

With the series being held in a bio-secure environment, Root will have to self-isolate for a week after leaving hospital before re-joining the squad.

The first Test begins on 8 July.

On Stokes, England coach Chris Silverwood said: “He is is a talisman, he leads from the front. He’s conscious of the people around him, so I think he’ll do a great job in Rooty’s absence.

“It will be interesting to see what he does, because obviously it is his first time captaining England. We know he has got an aggressive nature, but equally there is a good cricket brain in there as well.

“He will have a lot of say in what is going on and he will play a big part in giving his opinions across the selection as well.”

Root will rejoin the squad on 13 July before the second Test at Old Trafford, which begins on 16 July.

He will also miss the three-day intra-squad warm-up match in Southampton, which begins on Wednesday.

In Root’s absence, Stokes will captain one side and Jos Buttler, who has been confirmed as vice-captain for the first Test, will lead another.

From the 30 men that have been training in Southampton, 27 will take part in the match. As well as Root, pace bowler Jamie Overton and spinner Amar Virdi miss out.

“It is a great opportunity for some players to show us what they can do in this game,” said Silverwood. “We’ve mixed the sides up to make make it as competitive as possible.

“I’m sure there’ll be a few in there who are very keen to impress.”

Buttler’s confirmation as vice-captain means he will remain as wicketkeeper for the first Test, holding off competition from Ben Foakes. Jonny Bairstow and the uncapped James Bracey are also involved in the training match, and all four are expected to keep wicket at some point.

With Root not playing in the first Test, it seems most likely that England’s top four will be Rory Burns, Dom Sibley, Zak Crawley and Joe Denly, though the intra-squad game also allows Essex’s Dan Lawrence the chance to impress.

Moeen Ali, Dom Bess and Jack Leach are competing for what is likely to be one spinner’s spot, while there are probably only three pace-bowling berths for James Anderson, Stuart Broad, Jofra Archer, Mark Wood, Sam Curran and Chris Woakes.

Others, such as Lancashire leg-spinner Matt Parkinson, all-rounder Lewis Gregory, and fast bowlers Craig Overton, Saqib Mahmood, Olly Stone and Ollie Robinson can push their case should injuries or the need to rotate arise later in the summer.

“I expect hard cricket,” said Silverwood. “I’m looking forward to seeing what some of the other guys can do.”

The intra-squad match, which begins at 11:00 BST, will be streamed on the England and Wales Cricket Board’s website.

In West Indies’ second intra-squad match in Manchester, captain Jason Holder was dismissed cheaply again when play finally got under way on day two after rain.

Holder, who was dismissed for a first-ball duck in the squad’s first practice match last week and did not bowl as he nurses an ankle injury, made just five from 13 balls, having earlier been dropped second ball before scoring.