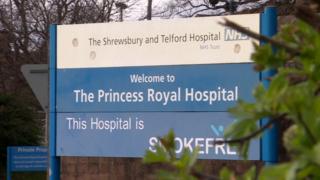 A police investigation has been launched into a hospital trust at the centre of a baby deaths inquiry.

More than 1,000 families have contacted an independent review into Shrewsbury and Telford Hospital NHS Trust, with cases dating back more than 40 years.

West Mercia Police said it was investigating whether there is “evidence to support a criminal case either against the trust or any individuals involved”.

The force said it had met with NHS Improvement, the department of Health and the independent reviewer to discuss complaints made against the trust.

It encouraged anyone who has information, but has not yet been in contact with the team behind the independent review, to get in touch.

Louise Barnett, chief executive at the trust, said it would “fully cooperate with the investigation”.

“I would like to reassure all families affected that we are listening and acting on feedback,” she said.

“We are not able to comment further to avoid prejudicing the investigation.”

Led by Donna Ockenden, the independent review is focusing on claims that a number of babies and mothers died or were harmed in the care of the trust.

A leaked report by maternity expert Ms Ockenden outlined a catalogue of maternity failings from 1979 to the present day.

In an update in April, she said the number of families involved in the maternity review stands at 1,170.

Earlier this year, it was revealed the trust would be repaying almost £1m of the payment it received under the NHS’s Maternity Incentive Scheme, weeks before its services were rated inadequate.

Rhiannon Davies and husband Richard Stanton, whose baby Kate died in 2009, were among the families who first pushed for the independent inquiry.

Ms Davies said she had no comment to make on the news of the police investigation.