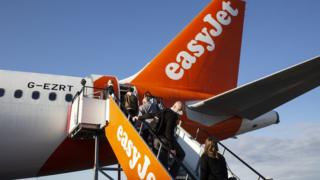 Image copyright PA Media EasyJet says it has begun consultations on plans to close bases at Stansted, Southend and Newcastle. It follows an announcement by the airline that it may need to reduce staff numbers by up to a third because of the coronavirus pandemic.The Unite union said nearly 1,300 UK crew members faced losing…

EasyJet says it has begun consultations on plans to close bases at Stansted, Southend and Newcastle.

It follows an announcement by the airline that it may need to reduce staff numbers by up to a third because of the coronavirus pandemic.

Pilots’ union Balpa said it had been told by EasyJet that 727 of its UK-based pilots were also at risk of redundancy.

That is equivalent to one in three of its pilots, Balpa said.

“We are committed to working constructively with our employee representatives across the network with the aim of minimising job losses as far as possible.”

“EasyJet won’t find a supply of pilots waiting to come back when the recovery takes place over the next two years.”

And Unite said the plan to make 1,290 cabin crew redundant was a “massive blow” for a “battered industry”.

“There is no need for this announcement at this time, especially since Easyjet has taken a multi-million pound government loan which it ought to be putting to use defending UK jobs,” said national officer for civil aviation Oliver Richardson.

Easyjet currently has 11 bases in the UK, with 163 aircraft, serving 546 routes.

Even though it is looking at closing the Stansted, Southend and Newcastle bases, it said the airports would remain part of its route network.

That means it will continue to fly in and out but will not have aircraft and crew based permanently at the airports.

The job cut proposals are not limited to the bases that may close, a Unite spokesman said.

Newcastle Airport said it was “saddened to hear of possible job losses and the significant impact this would cause.”

“This is very disappointing for the airport, airline and the North East as a whole and we sympathise with everyone affected by this announcement.”

EasyJet said in May that it planned up to 4,500 job cuts as it struggled with the collapse in air travel due to the coronavirus crisis.

It has started to fly passengers again, but does not expect 2019 levels of demand to be reached again until 2023.

Airlines have been hit hard by lockdowns and travel restrictions around the world, with many announcing job cuts.

Reuters reported on Tuesday that Air France/KLM would present a plan to unions on Friday to cut more than 6,500 jobs over the next two years as the airline deals with the effects of the coronavirus crisis.