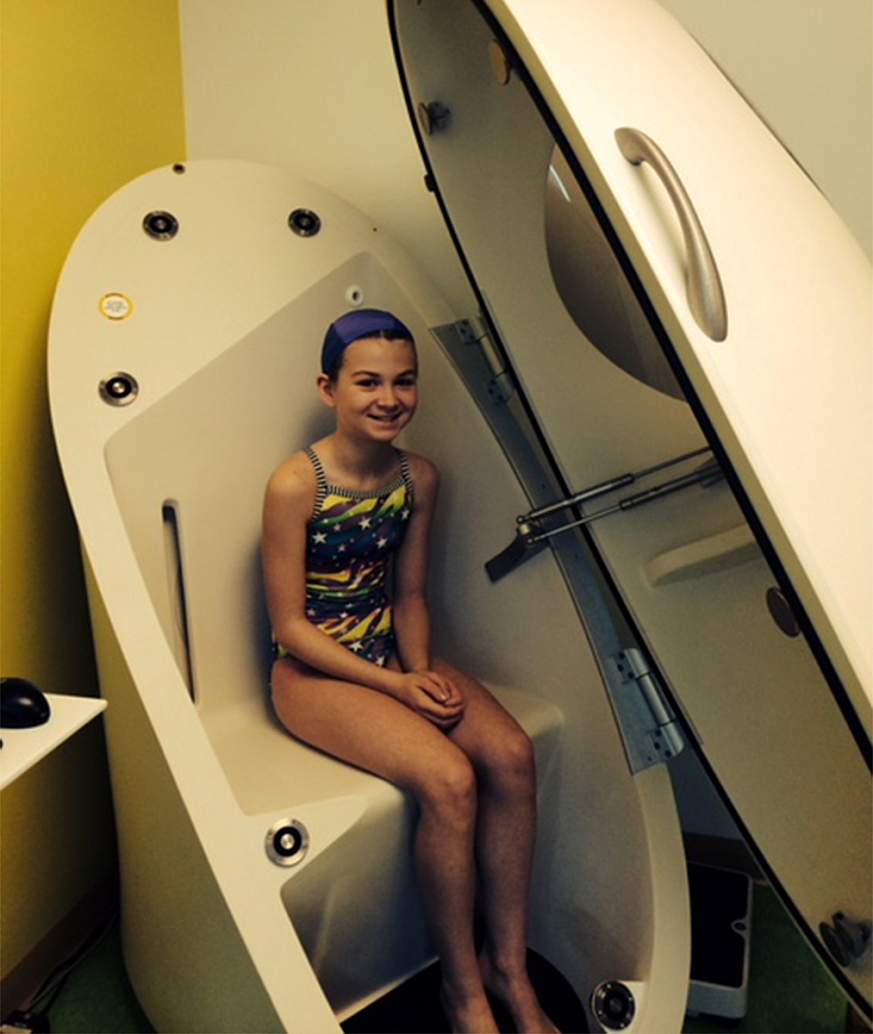 News ReleaseTuesday, September 11, 2018 Researchers followed mothers and their children 10-14 years after birth. A participant sits ready for body composition testing at Lurie Children’s Hospital during a visit for HAPO-FUS.Lurie Children’s Hospital of Chicago/Northwestern University Mothers with elevated blood glucose during pregnancy – even if not high enough to meet the traditional definition…

Researchers followed mothers and their children 10-14 years after birth.

Mothers with elevated blood glucose during pregnancy – even if not high enough to meet the traditional definition of gestational diabetes – were significantly more likely to have developed type 2 diabetes a decade after pregnancy than their counterparts without high blood glucose.

The results are part of a follow-up study published Sept. 11 in the Journal of the American Medical Association. Funded primarily by the National Institute of Diabetes and Digestive and Kidney Diseases (NIDDK), part of the National Institute of Health, the Hyperglycemia and Adverse Pregnancy Outcomes-Follow-up Study or HAPO-FUS, followed mothers and their children 10-14 years after birth.

The original HAPO study found that even modestly elevated blood glucose levels increased the risks of complications for the baby both before and shortly after birth. Based on these results many, but not all, organizations adopted a new definition of gestational diabetes, a type of diabetes that occurs during pregnancy.

HAPO-FUS compared the long-term effects of blood glucose levels in mothers who would have met the new definition of gestational diabetes with those who did not. Researchers aimed to learn if modest increases in blood glucose increased the mother’s risk of developing type 2 diabetes or prediabetes and the risk of obesity in the mother’s offspring at least a decade after giving birth.

Adjusting for the mother’s BMI reduced – but did not eliminate – the differences between the groups.

“The differences in mothers and their children due to the mother’s higher blood glucose are very concerning. Even accounting for the mother’s weight, glucose had an independent effect,” said Dr. Barbara Linder, a study author and senior advisor for childhood diabetes research at the NIDDK. “Our findings add to the motivation to find ways to help women at high risk for gestational diabetes who are or plan to get pregnant to take steps to reduce their risk.”

The original HAPO study looked at 23,316 mother-child pairs and found that a mother’s blood sugar levels, even short of diabetes, were associated with her newborn’s birth weight and body fat. HAPO results led an international panel of experts to recommend new diagnostic criteria for gestational diabetes in 2010. However, not all professional groups adopted these proposed criteria.

“HAPO helped redefine gestational diabetes, and now its follow up continues to raise important alarms about the long-term danger of high blood glucose levels during pregnancy,” said study chair Dr. Boyd Metzger, emeritus Tom D. Spies Professor of Nutrition and Metabolism at the Northwestern University Feinberg School of Medicine, Chicago. “This study shows that both mothers with elevated blood glucose levels and their offspring are at higher risk for adverse health effects later in life. More research is needed to find interventions to help both these women and their children.”

None of the women in HAPO-FUS were diagnosed with or treated for gestational diabetes during their pregnancy. HAPO recruited an international, racially and ethnically diverse group. Limitations of the data in HAPO include that body mass index was obtained during pregnancy, not before. As well, HAPO-FUS did not collect data on the women or children’s lifestyles to evaluate other factors that could contribute to obesity or type 2 diabetes.

The results build on findings from other studies showing that type 2 diabetes in mothers during pregnancy is associated with obesity in that mother’s offspring and that elevated blood glucose increases risk of type 2 diabetes in the woman after pregnancy.

“HAPO and its follow-up study have shown the detrimental long-term effects of elevated blood glucose on both mother and child and the importance of early intervention for women at risk for gestational diabetes,” said NIDDK Director Dr. Griffin P. Rodgers. “We hope these results will be used to improve the health of generations to come.”

HAPO-FUS was conducted at 10 clinical centers around the world:

The NIDDK, a component of the National Institutes of Health (NIH), conducts and supports research on diabetes and other endocrine and metabolic diseases; digestive diseases, nutrition and obesity; and kidney, urologic and hematologic diseases. Spanning the full spectrum of medicine and afflicting people of all ages and ethnic groups, these diseases encompass some of the most common, severe, and disabling conditions affecting Americans. For more information about the NIDDK and its programs, see https://www.niddk.nih.gov.

About the National Institutes of Health (NIH):
NIH, the nation’s medical research agency, includes 27 Institutes and Centers and is a component of the U.S. Department of Health and Human Services. NIH is the primary federal agency conducting and supporting basic, clinical, and translational medical research, and is investigating the causes, treatments, and cures for both common and rare diseases. For more information about NIH and its programs, visit www.nih.gov.