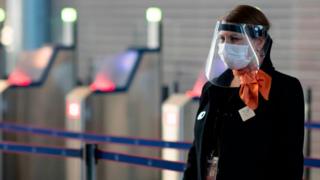 Image copyright Getty Images Plans to introduce a two-week quarantine period for people arriving in the UK are being developed by the government.Further details are expected to be announced by Home Secretary Priti Patel at Friday’s daily briefing. But what do we know so far? What are the new quarantine rules?Any passengers arriving in the…

Plans to introduce a two-week quarantine period for people arriving in the UK are being developed by the government.

Further details are expected to be announced by Home Secretary Priti Patel at Friday’s daily briefing. But what do we know so far?

What are the new quarantine rules?

Any passengers arriving in the UK by plane, ferry or train – including UK nationals – will have to provide an address where they will remain for two weeks.

It is thought they could be fined £1,000 if they fail to self-isolate for a fortnight.

All arrivals will be asked by the UK Border Force to fill in a form with contact information and health officials could carry out surprise visits to check they are complying. If travellers don’t provide an address, the government will arrange accommodation.

The idea is to reduce the spread of coronavirus by minimising the contact international travellers have with other people when they first arrive.

The measures are expected to come into force sometime in June.

Do the quarantine rules apply to everybody?

Road hauliers and medical officials would be exempt, as well as those arriving from the Republic of Ireland.

Initially, it was suggested the rules would also not apply to travellers from France. However, the government later insisted the quarantine measures will also apply to them.

Transport Secretary Grant Shapps has said “air bridges” could be introduced. This would be an arrangement where travellers from countries with low coronavirus levels could be exempt from quarantine.

Speaking to the BBC, Greece’s tourism minister called for his country – which has not been badly affected – to be among them.

The boss of the UK’s national tourism agency – Visit Britain chief executive Patricia Yates – told MPs it was an “interesting” idea and indicated the US could be open to agreeing a deal.

UK airlines fear the measures will have a devastating impact on their industry and the wider economy.

Michael O’Leary, chief executive of Ryanair, has said the policy had “no credibility” and has predicted it will be gone by June.

The British Ports Association, which represents ferry companies, has also spoken out against the measures – calling them “overzealous”.

What other measures have been put in place?

The government guidance says all flight passengers should remain at least 2m (6ft) apart from other people wherever possible and consider wearing a face covering.

People travelling through Manchester, Stansted and East Midlands airports have already been told to cover their faces and wear gloves.

EasyJet has said all passengers and cabin crew will be told to wear face masks when it resumes some flights on 15 June.

It previously said it would keep the middle seats on planes empty for a time. Emirates and the US airline Delta have announced similar plans.

However, the International Air Transport Association, which represents global airlines, says leaving the middle seat empty would not improve passenger safety. It also says most airlines would not have made money last year if a third of the seats had been removed.

Some temperature screening trials will also be conducted at Stansted. Heathrow, one of the world’s busiest airports, is already trialling large-scale temperature checks.

Air France says passengers will be temperature-checked before flying. The carrier has also made face masks compulsory – similar to several US airlines.

How many people are travelling?

The government recommends international travel only when absolutely necessary and nobody should travel if they display any coronavirus symptoms.

Since that advice was issued, far fewer people have been flying. For example, between 16 and 22 April, the number of air passengers coming into the UK was 99% lower than the same period in 2019.

Ryanair, for example, carried 40,000 passengers in April – down from 13.5 million in the same month last year. It expects passenger numbers to halve in the current financial year.

However, the airline still plans to reintroduce 40% of its flights from 1 July, subject to travel restrictions being lifted and safety measures being brought in at airports.

British Airways is reviewing its plans to run 50% of its schedule from July, because of new quarantine rules.