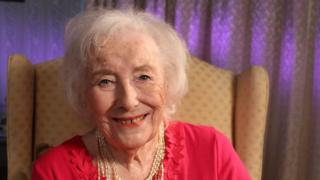 Dame Vera Lynn has become the oldest singer to score a UK top 40 album, beating her own record.

Dame Vera became the first centenarian to chart when it was first released in 2017, reaching number three.

The upsurge in popularity for the album coincided with the 75th anniversary of VE Day, which marked the end of World War Two in Europe.

Dame Vera, who became known as “the forces’ sweetheart” for entertaining troops during the conflict, also sent a message that while people may apart due to lockdown measures, “hope remains even in the most difficult of times”.

It’s been quite a time of late for elderly chart stars, following the success of Captain Tom Moore, who became the oldest person ever to score a number one single in the UK in April.

At the age of 99, his cover of You’ll Never Walk Alone, alongside crooner Michael Ball, raised money for the NHS Charities Together fund.

This week, The D-Day Darlings, a wartime-style act who found fame on Britain’s Got Talent in 2018, are at number five on the album chart.

In the singles chart, US rapper DaBaby came of age by securing his first number one with Rockstar.

The track, which features Roddy Ricch, knocked Drake’s Toosie Slide off top spot, thanks largely to its use in a viral dance challenge on TikTok.