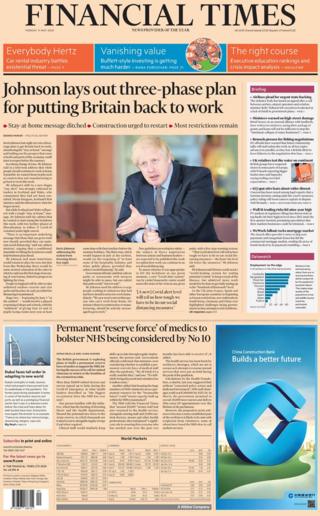 Image caption “Boris keeps handbrake on” is how the Daily Mail describes the prime minister’s televised address on Sunday night, in which he outlined “the first sketch” of an exit from the coronavirus lockdown – including the possibility of reopening shops and primary schools in England next month. From Wednesday, people will be allowed unlimited…

The Sun is frustrated by what it sees as the prime minister’s failure to be more bold in easing the coronavirus restrictions.

Under the headline: “Lockdown’s been a terrible mistake”, columnist Trevor Kavanagh, describes as “feeble” Boris Johnson’s message of “stay alert, control the virus, save lives”.

“This is a prime minister paralysed by indecision,” he writes, “kicking himself for unforced errors, terrified of being blamed for every new death”.

The Daily Telegraph’s leader is more sympathetic. “The lockdown cannot continue for ever,” it says, “and all the prime minister is urging people to do is use their common sense.”

But it also suggests that Mr Johnson could have gone further – perhaps lifting restrictions in parts of the UK less seriously affected by Covid-19.

A piece by the political sketch writer, Quentin Letts, features on the front of the Times. He thinks the address had a “daunting air” – pointing out that Mr Johnson spoke “with his hands clenched in emphasis”. But he concludes that those hoping for a list of lifted restrictions would be disappointed.

The Guardian’s lead headline is: “PM’s lockdown release leaves Britain confused and divided“. Its columnist, Simon Jenkins, seeks to explain why. “Boris Johnson says we can be a little less careful, while still being extremely careful,” he writes. “What that means remains unclear”.

The Mirror has a similar assessment of the decision to downgrade the “stay at home” message to “stay alert” – calling it “confusing and potentially catastrophic”.

A behavioural expert tells the paper that the new slogan “may be taken as a green light by many not to stay at home – and begin socialising with friends and other activities that increase the risk of transmission”.

The Financial Times reports that the government is considering the formation of a permanent reserve force of medics to support the NHS. It would work in the same way that military reservists bolster the armed forces.

It says the idea came about because the call for retired NHS staff to return to the front line and fight Covid-19 was so successful. The FT has been told that the initiative has the support of both Downing Street and the Department of Health.

Several papers look ahead to the Premier League’s discussions about how to finish the football season, with the Guardian calling it a “week of chaos”. It says clubs are divided between those which want to resume playing as soon as possible – and those concerned about the health implications, and the conditions under which matches would be played.

The i reports on the annual Dorset Knob-eating contest.

For the uninitiated, Dorset Knobs are a type of savoury biscuit, shaped like a small bun and renowned for their hardness. They’re traditionally soaked in sweet tea before being eaten, and were said to be a favourite of the novelist, Thomas Hardy.

The i reports that the competition – in which the biscuits are eaten dry – had to be held online because of the lockdown. This year’s winner was Kate Scott – who managed to eat eight and a half.

Finally, the Times celebrates the fact that an abandoned dock – on the river Roach in Essex – has been given protected status, because it was where Charles Darwin’s ship, HMS Beagle, was dismantled.

The paper’s leader reveals that an observation platform will be built there. Passers-by, it says, “will no doubt welcome the chance to transport themselves, if only for a moment in their minds’ eye, from the mudflats of Essex to the Galapagos Islands”.