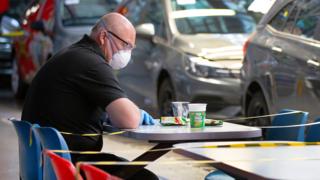 Image copyright Getty Images UK Prime Minister Boris Johnson has announced his plans to restart the economy and ease lockdown restrictions in England. But how could everyday life change?Can more people go back to work? From Monday, people in England who “can’t work from home” will be “actively encouraged to go to work” But they…

UK Prime Minister Boris Johnson has announced his plans to restart the economy and ease lockdown restrictions in England. But how could everyday life change?

Can more people go back to work?

Companies will also need to look at staggering shifts, rethink how equipment is shared and plan safe walking routes for staff – in offices, on factory floors and at building sites.

The issue of how businesses can secure personal protective equipment without competing with the NHS has raised concerns.

And unions say employers must be compelled to protect staff.

When will schools and universities return?

The Welsh government has ruled out school reopenings happening on 1 June.

Scotland’s First Minister, Nicola Sturgeon, has said she does not expect schools to be reopening as soon as 1 June.

No detail is available on how school reopening would work in England. But there has been speculation previously that measures to keep pupils and teachers safe could include:

Meanwhile, there is uncertainty over whether students will be able to go to university in person in September or whether they will be taught partially or completely online.

Will people be able to exercise more?

The Welsh and Scottish governments have said people can exercise outdoors more than once a day from Monday.

How will the virus threat be publicised?

When can I go shopping again?

Garden centres in Wales will open from Monday. Decisions are awaited in Scotland and Northern Ireland. Mr Johnson made no mention of garden centres in England in his speech.

Some DIY stores, meanwhile, have already reopened – but they are accepting card payments only and have shorter trading hours.

What about pubs, cafes, restaurants, theatres and cinemas?

Draft government guidance previously seen by BBC News had said bar areas, seated areas in restaurants and cafes must remain closed even as the economy is opened up – and venues should serve takeaways only.

Will taking flights get easier?

No more detail was given in Mr Johnson’s speech on what form this quarantine would take or how it would be enforced.

Overall, social distancing is a big challenge for airports and airlines, with Heathrow boss John Holland-Kaye saying it is “physically impossible”.

There has been speculation that air passengers may have to:

UK airlines say they have been told by the government that people arriving in the UK from any country other than the Republic of Ireland from the end of this month will have to self-isolate for 14 days – Mr Johnson did not give this much detail in his speech.

Meanwhile, the government has said people should not book holidays at home or abroad until social distancing rules are relaxed.