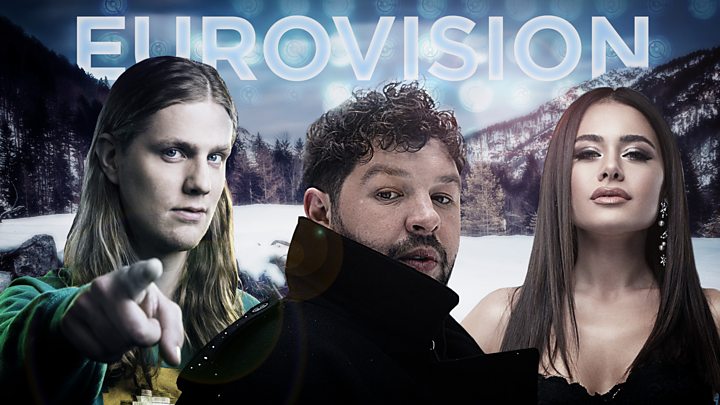 Image copyright A Corbijn, JM Naglestad, Warner Music Spain, Getty Image caption The Eurovision entrants for (from left to right) the Netherlands, Norway, United Kingdom, Spain and Australia Back in February, James Newman stepped onto a small stage at a London club to perform My Last Breath live to a crowd for the first time.…

Back in February, James Newman stepped onto a small stage at a London club to perform My Last Breath live to a crowd for the first time.

After writing hits for Ed Sheeran, Calvin Harris and Little Mix he was introducing himself to the world as an artist in his own right.

That morning Radio 1 Breakfast had revealed him as the UK’s entry at the 2020 Eurovision Song Contest in the Netherlands.

James decided taking part in the world’s largest live music event was “too good an opportunity to turn down”.

“It’s a baptism of fire for a new artist.”

After the UK finished in last place in 2019, James’ participation was seen as a new direction for the country’s involvement in the contest.

But coronavirus put a stop to it.

On 18 March the Eurovision Song Contest was cancelled for the first time in its 64-year history.

Organisers called the decision “difficult” and said everyone involved in the contest was “heartbroken”.

At that point the UK was fast approaching lockdown and James said he was “expecting” the announcement but was still “absolutely gutted”.

“I was meant to be singing on the stage in front of a TV audience of 200 million and 20,000 people in an arena – but what’s more important is people’s health.”

James was one of 41 acts who were due to compete in the Dutch city of Rotterdam.

Lesley Roy, representing Ireland, says she went from “excitement, high energy and a buzz” about her song to “being upset but not really shocked”.

Blas Canto’s anxiety worsened when “the most incredible festival” was cancelled.

“I’ve fought it since I was 20 but now this situation is hard because my heart is broken,” the 28-year-old Spanish contestant tells Newsbeat.

The former boyband member, who’s duetted with Kelly Clarkson, developed a rash across his body as a result of the anxiety and had to pull out of online concerts.

“My throat was closed and my mind,” he explains. “I can’t breathe normally or sing like I used to do and it’s hard for me because I want to give my best to the fans.”

Victoria Georgieva, 22, was representing Bulgaria, who were returning to the contest after a year’s absence.

Tears Getting Sober, a sparse but melodic Billie Eilish-esque ballad, was seen as one of the favourites.

“It meant a lot because I’ve always wanted to represent Bulgaria on the big stage. When I found out I was selected I got anxiety and happiness at the same time because it’s such a big thing.”

Victoria and James were both due to perform with other contestants at pre-Eurovision concerts across Europe, which were all cancelled.

The coronavirus pandemic meant James’ diary went from “100 to zero”. But it also had a personal affect on him – when he began showing symptoms of the virus.

“I lost my sense of smell and taste,” he reveals. “I started getting chills and couldn’t get out of bed. I had a tight chest.”

He had moments when he felt better, then “couldn’t breathe again” an hour later.

As an asthmatic, breathing was his main concern and he describes a feeling of “impending doom” as he didn’t know what was going to happen.

After a week of symptoms he reported feeling better but that lulled him into a false sense of security when he later began to feel even worse.

Now recovered, James says his illness “solidifies” why everyone has had to stay at home and why events with large crowds have been cancelled.

After Duncan Laurence won 2019’s contest with Arcade, the Netherlands was excited to host Eurovision for the first time in 40 years.

Rotterdam’s slogan for the contest was Open Up but its Ahoy Arena had to close down to be converted into a hospital to deal with Covid-19.

“I got to play my song there when it was empty,” explains Dutch entry Jeangu Macrooy. “You could see people building the hospital in the back, which was weird.”

There’s no confirmation on a 2021 host city but Rotterdam’s city council says it wants to welcome fans next year.

Jeangu was hoping the event would be “postponed to the autumn or December” – with the cancellation being his “worst case scenario”.

That’s exactly how Latvia’s Samanta Tina felt too after competing on national TV eight separate times hoping to be chosen as a Eurovision act.

“It’s always been my ambition as a singer to get on that stage,” Samanta tells Newsbeat.

After “finally making it” she was “broken” when she was told she wouldn’t get her dream.

Outside of sport there’s no bigger TV audience in the world than Eurovision, and the show is a massive hit with younger viewers.

Tens of thousands of international tourists were expected in Rotterdam during the week of the song contest.

The seriousness of the outbreak hit home for Danish entrant Tanne Balcells when she, along with singing partner Benjamin Rosenbohm, performed at their national selection show on 7 March.

Ben & Tan had expected to sing in front of 10,000 people at an arena in Copenhagen, giving them a taste of what the Rotterdam shows would have been like.

But following government advice they had to sing in an empty hall.

“We were disappointed at first,” Tanne admits.

“You’re preparing this whole thing to go on stage and feel the energy from the full arena and then the day before you get told there’s not going to be anyone there. It was very nerve-racking.”

At this stage Ben & Tan don’t know if they’ll compete next year, but several other countries have confirmed their acts will get a second chance.

Currently, there’s no word on whether the UK’s James Newman will be chosen for the 2021 contest, although he “absolutely” wants to represent his country again.

Australian entrant Montaigne is one of those who’ve been reselected but contest rules state it has to be with a new song.

The singer, whose real name is Jessica Cerro, says she’s disappointed she won’t get to perform Don’t Break Me because “life has revolved around it for six months”.

But she says there was “no doubt” about wanting to come back in 2021. “The fandom is amazing so I want to be able to see it through to the end.”

Crucially, she won’t have to compete in Australia Decides – where the public vote for who they want to send.

The same can’t be said for Norway’s Ulrikke Brandstorp, who has turned down a chance to represent her country in 2021.

She won the Norwegian selection show Melodi Grand Prix (MGP) and was asked to compete in it again next year.

But it’s a TV programme with a public vote – so there’s no guarantee she’d even win.

Eurovision was her “biggest dream” and it got “broken”.

“This year was a hard and bumpy ride and I need a break.”

Fans will say the performance and staging is just as important as the music if you want to win the contest.

Iceland’s Daoi Freyr had that in mind when he came up with his song, Think About Things, which was another pre-contest favourite.

“The whole performance was in my head before I wrote the song.”

The video features simple dance moves and as a result the track became a TikTok trend – with thousands of people copying the routine.

Iceland has never won the competition but he could tell people “were getting excited” with the momentum online.

“Lots of people are more disappointed than I am,” he jokes.

Organisers have helped fans deal with the cancellation by streaming online concerts featuring 2020 acts as well as previous contestants.

The BBC has also announced coverage across TV, radio and online.

For now, James has to wait to find out if he’ll get picked for next year’s contest.

“I felt welcomed into the Eurovision world,” he says. “It’s such a diverse celebration of music and I love being part of something so big.

“I want to finish what I started.”