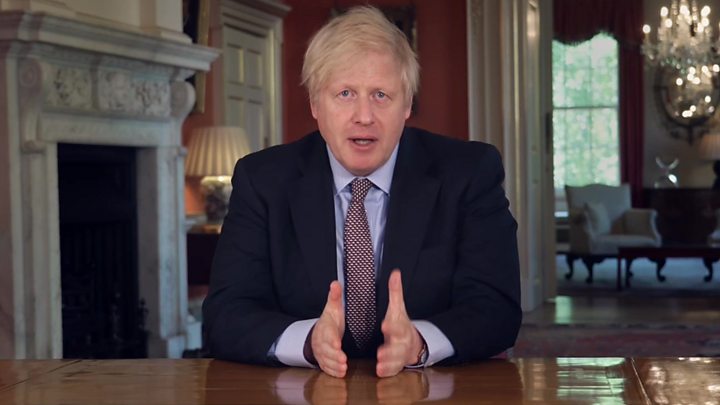 Media playback is unsupported on your device Media captionBoris Johnson: “We are taking the first careful steps to modify our measures” Boris Johnson has unveiled a “conditional plan” to reopen society, allowing people in England to spend more time outdoors from Wednesday.The PM also said people who could not work from home should return to…

The PM also said people who could not work from home should return to the workplace – but avoid public transport.

He said a new Covid Alert System with five levels would govern how quickly lockdown restrictions could be eased.

He hoped the next step “at the earliest by 1 June” would be for some primary pupils to return to school in England.

In an address to the nation, Mr Johnson said this stage would also involve reopening shops – but he cautioned this would only happen if the science supported it.

The next step could see some hospitality businesses and other public places reopen – “if the numbers support it” – but not earlier than 1 July.

He said these steps formed part of a “first sketch of a roadmap for reopening society”.

The PM added: “This is not the time simply to end the lockdown this week. Instead we are taking the first careful steps to modify our measures.”

Clarifying the conditions in which schools and shops would reopen, Mr Johnson said: “Throughout this period of the next two months we will be driven not by mere hope or economic necessity.

“We are going to be driven by the science, the data and public health.

“And I must stress again all of this is conditional, it all depends on a series of big ifs.”

The PM explained how the “R” number – the reproduction rate of the virus – would be crucial in deciding whether lockdown could be eased further.

Experts have said that keeping R below 1 – meaning one person with the virus passes it on to one other person – is the priority.

“It depends on all of us – the entire country – to follow the advice, to observe social distancing, and to keep that R down,” he said.

He said those who could not work from home would now be encouraged to return to work – but they should avoid using public transport to get there if possible.

Mr Johnson mentioned construction and manufacturing as examples of the sorts of industries where restarting would now be explicitly encouraged.

Workplaces would receive guidance on how to become “Covid secure”, Mr Johnson added.

The PM also said he was “serving notice” that it would soon be the time to impose a quarantine on people coming into the country by air.

In a joint statement later, Mr Johnson and French President Emmanuel Macron agreed quarantine measures would not apply between France and the UK “at this stage”.

‘Trying to pull off the impossible’

The prime minister is effectively trying to pull off the impossible.

He wants to try to restart normal life, while keeping the virus at bay with limited means to do so.

With no vaccine, the government is reliant on containing any local outbreaks.

But the problem is that even with the extra testing that has been put in place over the past month, there are big holes in the UK’s ability to suppress the virus.

It takes too long to get test results back – several days in some cases – and those most in need of regular testing, such as care home staff for example, are still reporting they cannot always access tests.

Our ability to trace the close contacts of infected people remains unknown – the piloting of the system, which involves the use of an app and army of contact tracers, has just started on the Isle of Wight.

It means we are effectively fighting this “invisible killer” with one hand behind our back.

We are not alone in struggling, similar problems are being encountered by other countries.

But we are still some way behind the best prepared and equipped, such as Germany and South Korea.

He told BBC News that millions of people who cannot work from home were effectively being told to go to work with just 12 hours’ notice – and not to use public transport.

“That’s why I say the statement raises as many questions as it answers,” he said.

Mr Johnson said in his speech he had consulted “across the political spectrum, across all four nations of the UK” and that his plan was a “a general consensus on what we could do”.

But Scottish First Minister Nicola Sturgeon said she felt ending the previous “stay at home” message was the wrong choice for Scotland.

The PM earlier unveiled the new message of “stay alert, control the virus, save lives” in England – but Ms Sturgeon said it would not apply in Scotland at the moment.

Wales’ health minister Vaughan Gething also said there had not been a “four-nations agreement” on the new message and that the advice to “stay at home” in Wales was unchanged.

Scotland, Wales and Northern Ireland have powers over their own lockdown restrictions, with England’s measures set by the government at Westminster and leaders have expressed a wish to move forward as one – though they may do so at different speeds.

A further 269 people have died in the UK after testing positive for coronavirus, taking the total number of deaths recorded to 31,855.

The number of deaths recorded tends to be lower over the weekend because of reporting delays.

The government has also missed its target of 100,000 coronavirus tests a day for the eighth day in a row, with 92,837 tests on Saturday.

How have you been affected by the pandemic? Tell us about your experience by emailing haveyoursay@bbc.co.uk.

Please include a contact number if you are willing to speak to a BBC journalist. You can also contact us in the following ways: