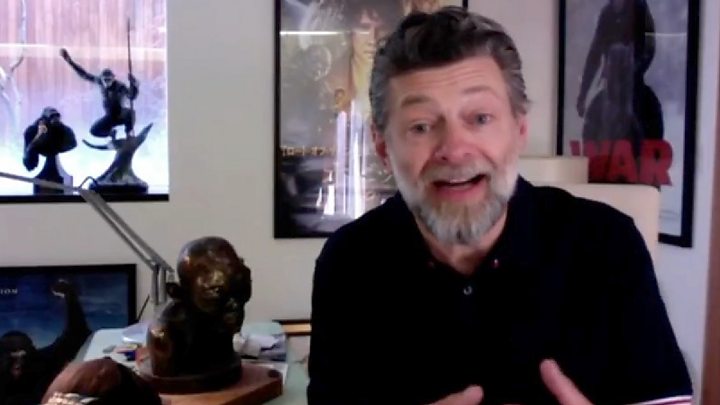 Image copyright Andy Serkis Image caption Andy Serkis welcomed fans joining him on “this huge expedition we’re about to go on in our living rooms” British actor Andy Serkis has raised more than £283,000 ($351,000) for charity by reading The Hobbit in full on a live stream. More than 650,000 people worldwide tuned in for…

More than 650,000 people worldwide tuned in for the online performance of JRR Tolkien’s 1937 fantasy adventure.

Serkis, 56, played the corrupted character Gollum in the big-budget film trilogies Lord of The Rings and The Hobbit, directed by Peter Jackson.

Viewers followed via YouTube and his Go Fund Me page.

The donations will go to NHS Charities Together and baby charity Best Beginnings, for which Serkis is an ambassador.

The actor performed the “Hobbitathon” in different voices, including his much-imitated Gollum.

“Thank you so much for joining me on this huge expedition we’re about to go on in our living rooms,” Serkis told viewers before he began the reading.

He thanked “the NHS and all the charities who are out there doing important work saving our lives and keeping us safe”.

As donations poured in, he joked: “We’ve already reached £100,000, so in fact, I don’t even have to do it, goodbye,” before pretending to get up and leave.

He paused at 11:00 BST to observe a two-minute silence for VE Day, but otherwise only stopped to use the toilet.

“So many of us are struggling in isolation during the lockdown,” Serkis said on Thursday.

“While times are tough, I want to take you on one of the greatest fantasy adventures ever written, a 12-hour armchair marathon across Middle Earth whilst raising money for two amazing charities which are doing extraordinary work right now to help those most in need.”

Serkis was awarded the Bafta film award for outstanding British contribution to cinema earlier this year for his ground-breaking motion capture work as Gollum, as well as on films like King Kong and the Planet of Apes movie series.

Speaking beforehand, he joked he might need to put up a “back in five minutes” sign when nature called, or when he needed a spot of precious lunch – but aside from that he was preparing to throw himself fully into the quest.