Boy dies after being hit by bus on Hereford Motorway, Monmouth 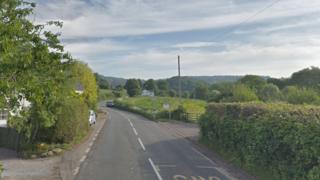 Image copyright Google Image caption The A466 is the main road between Monmouth and Hereford A minibus driver has been arrested after a crash in which a boy, aged seven, died. Ambulance crews were called to a collision on the A466 Hereford Road in Monmouth at about 15:50 GMT on Monday. The bus driver, a…

A minibus driver has been arrested after a rupture by which a boy, frail seven, died.

Ambulance crews were known as to a collision on the A466 Hereford Motorway in Monmouth at about 15: 50 GMT on Monday.

The bus driver, a person, 45, from Gloucester, used to be arrested on suspicion of inflicting death by careless using.

A spokeswoman from West Midlands Ambulance Provider – which attended the scene alongside with crews from Wales – said the boy used to be a pedestrian.

She said: “Sadly, nothing will most certainly be executed to set him and he used to be confirmed uninteresting on scene.”

Gwent Police closed the boulevard between Withy Lane and Buckholt for several hours following the incident.

The driver stays in custody whereas police appealed for witnesses.